The three rifle volley consists of no less than three and no more than seven rifles firing three volleys in memory of the fallen. The original history comes from the Roman era that at the end of the day of battle when the field of battle was cleared, if the soldier removing the slain soldier knew the name of the soldier, then they would call his name three times into the night as a form of remembering their sacrifice.

Typically three fired cartridges are placed into the folded flag prior to presentation to the next of kin; the cartridges signify "duty, honor, and sacrifice.” 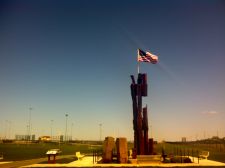